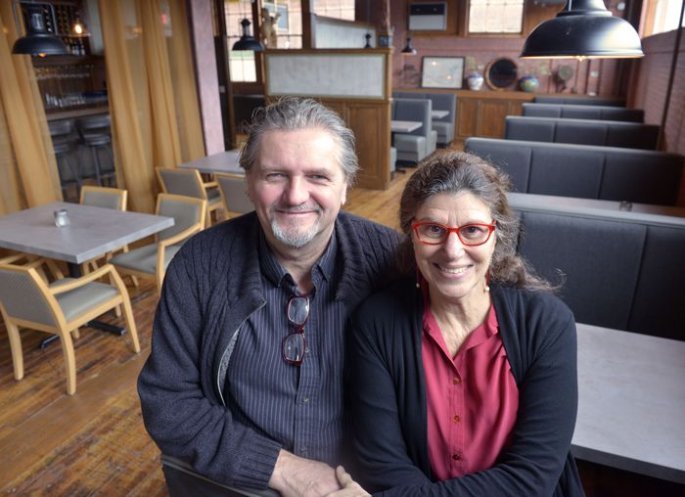 HOLYOKE — Gateway City Arts has office cubicles in a coworking space, table saws in its woodshop where folks can buy memberships, a deli that turns into a taco restaurant, drag-queen bingo, resident puppet makers and a capacity-500 concert hall that regularly attracts acts like Thurston Moore of Sonic Youth and 90’s jam-rockers Rusted Root.

Starting in January it’ll have a sit-down restaurant, Judd’s, with Czech food based on family recipes.

The owners even promise the bring back the ceramic studio.

“We just had to take it all apart during the construction,” said co-director Lori Devine on a recent whirlwind tour of the sprawling complex at 92-114 Race St.

Devine owns Gateway City Arts with Vitek Kruta — he’s the Czech half of the duo with the chicken paprikash and goulash recipes. They said a year’s worth of physical transformations is wrapping up as new programming plans come into focus.

“We are now entering the next phase at Gateway City Arts,” Kruta said. “We can never say the vision is complete. It’s evolving. But the physical work is complete. We have all the space developed.”

The coworking space, for example, opened this summer. It goes with the workshops that are also available for $80 or $120 a month, depending on what level of membership a person needs. Gateway City Arts also rents work space to “messier” creators like the puppet makers. One man used his membership in the woodshop to make dozens of beehives.

And that concert space will host even more shows, not only favorites from the record collection but also up-and-coming touring rock acts.

Working with promoters Signature Sounds, DSP Shows and lately on its own, Gateway City Arts hosted 70 shows in 2019 with plans to do about 100 in 2020.

For many of the shows, Kruta and Devine’s take is only from food and the bar. Promoters and bands get the ticket money.

What Gateway City Arts needs is more people — visitors, customers — despite Kruta and Devine’s estimate that they already get 30,000 to 40,000 visitors a year.

“We know this because we have sold-out shows,” Devine said. “People come from all over. We have people from New York, from Brooklyn, for shows.

But the problem is a lack of steady day-to-day, walk-up business in a neighborhood where, despite significant reinvestment in recent years, there just isn’t a lot of foot traffic. They need more members and tenants and more customers renting event spaces, along with more people going to shows.

Gateway City Arts is down the street from the Cubit building where Holyoke Community College has its new MGM Culinary Arts Institute. Devine and another group of partners own the Steam Building a few doors down, also a creative reuse of a mill property.

“It’s getting better,” Devine said. “The biggest challenge, again, is getting people to Holyoke.”

While she and Kruta work with the community and embrace Holyoke’s history, they recognize that Holyoke can be a challenging place to build a business.

“The biggest thing is the reputation of Holyoke,” she said. “Especially for locals. We need to draw people from Northampton. Everybody thinks about Easthampton now if they are going out to dinner. Holyoke hasn’t quite made it yet.”

“When we get the dispensary,” she said.

Canna Provisions is nearing completion of what would be the city’s first adult-use recreational cannabis shop a few blocks away at 380 Dwight St. The City Council has also approved zoning changes for a different shop at 40 Lyman St.

Erik Williams, co-founder and chief operating officer of Canna Provisions Group, said Gateway City Arts and its deli and sandwich shop have kept him and his crew fed as they set up shop.

“I think it’s important to, also, to have a lot going on,” he said. “It’s going to help everybody.”

Devine and Kruta, who describe themselves as life partners as well as business partners, started Gateway City Arts eight years ago, buying the building because they needed places to create their art and teach classes.

All the things that grew from that seed — the performance spaces, bars, restaurant and bistro, the winter festival and Czechtoberfest — came from the need to make money and support the project and a desire to create community.

And they’ve experimented with all sorts of offerings over the years, as a look through the area where Kruta paints all the building’s signs can attest. For example, Sunday brunches were offered and then went away.

Kruta was trained in the old world techniques of fine and decorative arts in the Czech Republic and Germany before embarking on a career restoring great churches and castles and as an artist.

He sees much of the Europe of his youth when he walks around Holyoke looking at the buildings and the canals.

“These cities industrialized and developed at the same time. You can see it in the buildings, the style,” he said. “It’s just like Prague.”