If You Build It, They Will Come…

First I would like to thank you from the bottom of my heart for your generous support and contributions to our GoFundMe campaign. I am going to share with you another great story and how magical of a place GCA is. This story goes back to 1986. I was not even living in the USA at that time.

As co-owners/directors of GCA, my partner Lori Divine and I get lots of phone calls from artists or their managers about wanting to perform or show their work at GCA.

One day in 2016 the phone rings: “Hello, my name is Joshua Krugman and I am the director of Bread and Puppet Theater and we would like to perform at your venue”…?! My heart started to beat faster and faster… and here is where the story begins. 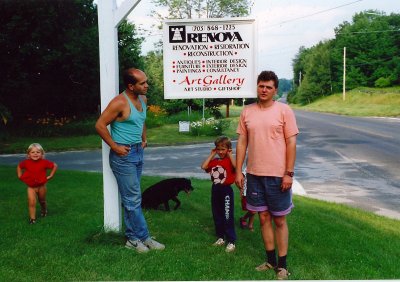 Renova Art Gallery and Art Restoration – Warren, CT. Vitek, his children and a friend pictured in 1991.

GCA is actually my 3rd project of its kind since I moved to the USA in 1991. My first 10 years in the USA were in Connecticut. And it was called Renova Art Gallery and art restoration business. The second was in 2001 when I moved to Mass to Easthampton and some of you might still remember The New City Arts at Eastworks.

Renova Art Gallery was located in Warren, the third smallest town in beautiful Northwest corner of CT on 68 acres of an old farm that belonged to the two Oscar-winning movie director Milos Forman and a friend of my father.

Milos and my father met when Milos was filming the Oscar winning movie Amadeus in Czechoslovakia in 1982. My father was a co-founder, singer and dancer of the famous Czech dance ensemble Chorea Bohemica. The ensemble appeared in the Amadeus movie in the scene where Mozart presents his popular opera the Magic Flute. Besides dancing in that scene, my father was also in charge of organizing some behind scenes at one of the filming locations that happened also to be our home for 10 years and the headquarters of my father’s landscaping firm, Castle Veltrusy located 20 miles north of Prague. When not performing, my father was a professional master gardener in charge of managing many castle gardens in Czechoslovakia.

As I mentioned in my first story about Adrian Belew, I escaped in 1981 to Germany after being involved in the Czech underground movement against the communist dictatorship. My father stayed in Prague until 1983. Then he too was persecuted and dragged around from one secret police station to another for almost two years. When the situation got to the point where he was going to go to prison, Milos Forman offered him help and sponsorship to come to the USA and live on his farm in Warren, CT. My father took his offer and after dramatic escape to Austria (perhaps another story I will share one day) he arrived to the US in 1983 and settled in Warren, CT. on Milos’s farm and took on the care of his 68 acres of land. 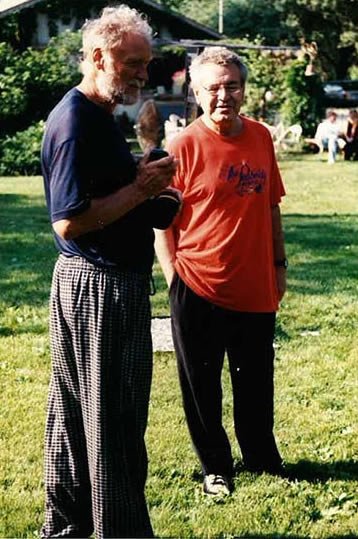 In 1986 I came to visit USA for the first time. The purpose of the visit was not only to see my father for the first time in 4 years but also to explore the possibility to relocate to US from Germany so we could live as a family near each other again. Upon my arrival to Warren, I was introduced to Milos and also some of his friends. I was also told as we discussed what we should do on this visit that we have to go to see Bread and Puppet Theater in Clover, Vermont and that we will camp there for two nights. I was of course very excited and eager to see everything I could on this 4 week long visit to USA.

The night before we went to Vermont we watched Milos’s movie HAIR which I never got to see because it was prohibited to screen in Czechoslovakia following Milos Forman’s escape to the US in 1974. In the movie Hair is a fantastic scene that happens to feature Bread and Puppet Theater in the New York’s Central Park. Some of you remember seeing gigantic puppets of Uncle Sam and big puppet of Mother Earth carried by dozens of performers. It was my first introduction to the history of the great BREAD AND PUPPET THEATER.

Because I don’t want to take much of your time, I encourage you to dig in to the history of this amazing and culturally unique and important theater group that stretches over 4 generations of visionaries, civil rights activists, artists and performers and essential part of American culture.

…well we went to Vermont and there on hundreds of acres of a beautiful property we spent three days of magical theatrical and communal experience. We camped in the field with hundreds of people from around the world who came to this annual festival for decades, watched performances, danced, listened to music, baked bread in a big brick oven and met with many people and made lots of new friends.

I was so excited and thought to my self… What a great introduction to America on my first visit!

Well to make the long story short, imagine now why my heart started to beat fast when Joshua Krugman was talking to me on the phone. As he was talking I could hardly focus on what he was saying because all these memories started to pop in my head. My father passed away in 2014 in Torrington, CT and Milos passed away two years later.

Turns out Joshua was born to his parents members of Bread and Puppet theater company and community around that time I went to visit for the first time in 1986. After I moved to the US in 1991, I was visiting Bread and Puppet Theater in Vermont every year until the big festival ended its operations and since then focused on smaller and traveling shows and apprenticeship of how to live in and contribute in a community, while learning the art of puppetry and theater. 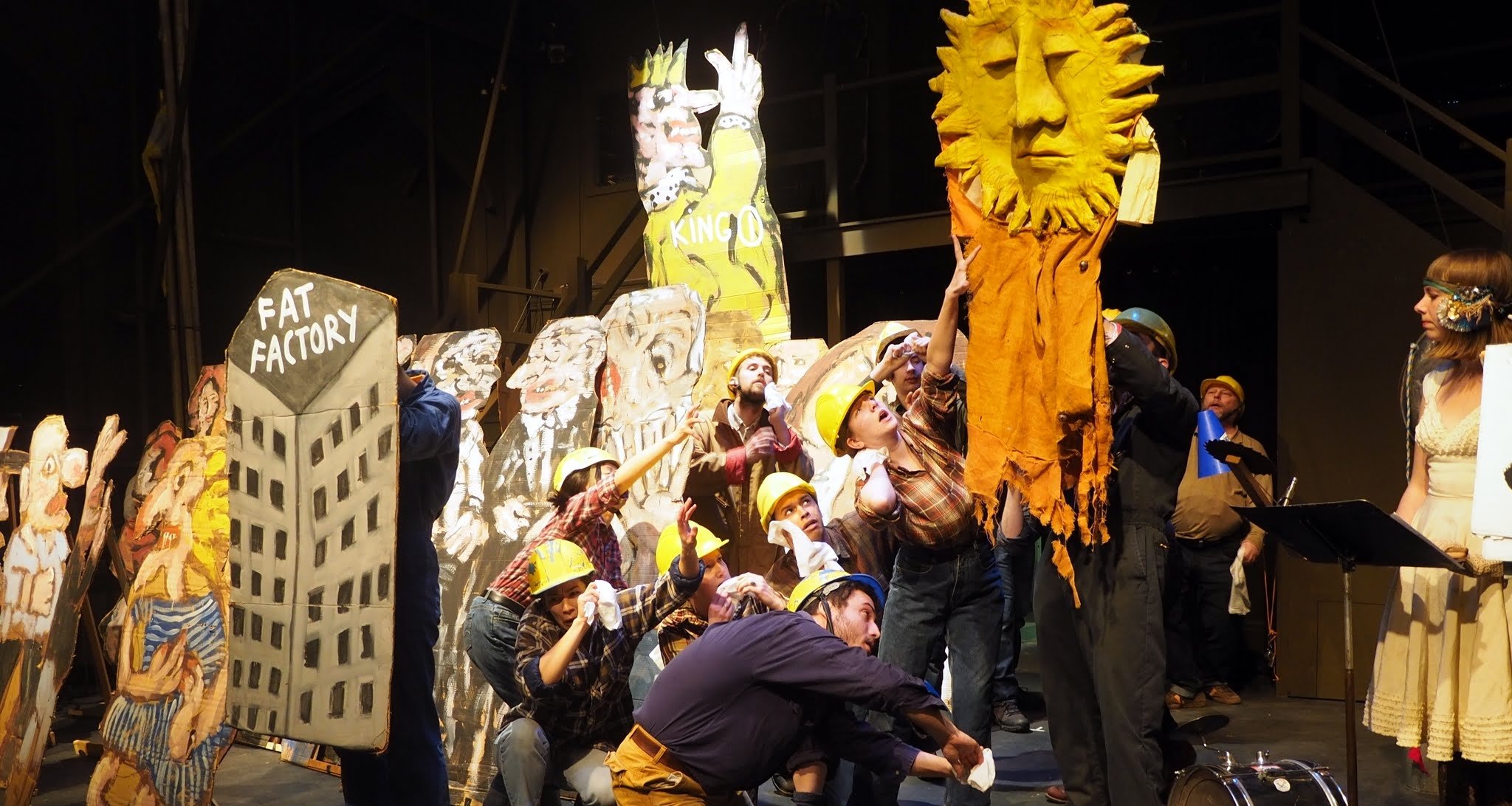 “If you build it they will come” was our motto building GCA and this was one of the examples how we evolved.

The moment has come. The colorfully painted converted school bus full of young people, cardboard props, music instruments and puppets arrived on Race Street. The new generation of Bread and Puppet Theater was here carrying on the great legacy of their founders. Lori and I were so excited. Soon they started to transform the space into the display of magic, fun, history, artwork and black box theater. They were super organized and very professional and efficient and what first looked like chaos full of gigantic puppets and mysterious objects soon appeared as perfectly organized stage and professional venue. During the set up Lori Josh and I were getting to know each other and also got to share the story I am writing about. Per our contract, we were providing a meal for the company before the performance started so we made family style lunch and talked more while we ate. When I was introducing the company to the audience I realized that it was exactly 30 years to the day when I saw them for the first time. Isn’t the universe sometimes suspiciously funny? After the amazing performance when the audience left the building, we stayed and talked for many more hours. It was time to go to sleep. We actually invited them to stay over at Lori’s house and by the time we got there everybody was so hungry again that we end up making another big meal for everyone which was so much in the spirit of the community that Bread and Puppet Theater always stood for.

It was very long and fun night. Next morning when they were leaving it was a bittersweet feeling. We knew we made new/old friends and the doors to GCA were open for them any time. They came two more times to GCA until Covid 19 shut that door closed for us all.

GCA located in Holyoke, MA became a venue with great reputation and mission that is deeply rooted in experiences like this.

Art and music and human creativity is the best remedy to get us through any difficult times, loss and sorrow. It gives us wings so we can rise above the challenges of the world and inspires us to find new perspectives and ways as we also discover ourselves and others. Thank you again for your support and the support of the arts and inspiration in our community.

Yours,
Vitek Kruta
Co-Creator of GCA 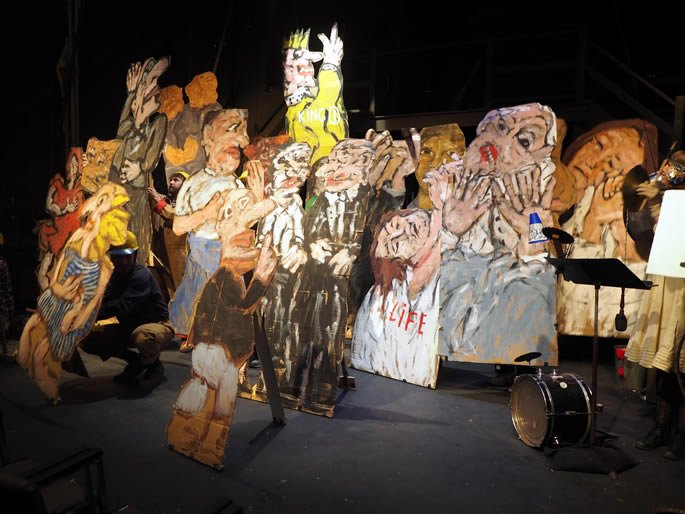 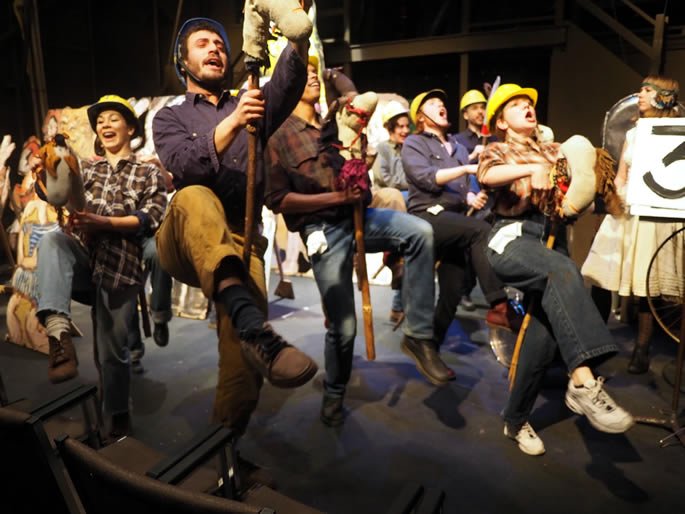