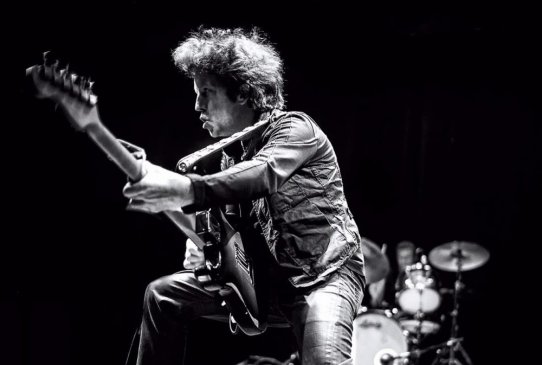 The New York Times called Willie Nile “one of the most gifted singer-songwriters to emerge from the New York scene in years,” and counts Bono Bruce Springsteen, Pete Townshend, Lou Reed, Lucinda Williams, and more among his fans.

While many of us have struggled to salvage a sense of purpose from a year’s worth of isolation, veteran New York rocker Willie Nile has tapped into his own lockdown experience as a source of inspiration for the set of haunting new songs that comprise his emotion-charged new release, The Day the Earth Stood Still.

Although the veteran singer-songwriter borrowed its title from the beloved 1951 science-fiction movie classic, the album was actually inspired by the sight of Nile’s beloved hometown temporarily turned into a desolate ghost town, thanks to COVID-19 safety precautions.

“It came from seeing the deserted streets of downtown Manhattan, with all the shops and stores boarded up and all these beautiful buildings looking down on everything,” Nile recalls, adding, “I have a storage space near the Holland Tunnel, and normally on a Friday night at rush hour, it can take an hour to move five blocks. But one Friday night last June, while walking home from my storage space and crossing Varick Street, I realized that there wasn’t a car in sight, and that I could have laid down in the middle of the street without anyone noticing. The title The Day the Earth Stood Still hit me, and I carried it around in my head for awhile, and eventually it sparked this set of songs.”

The title became the jumping-off point for one of the most powerful and personal albums of Nile’s long and prolific career. Indeed, The Day the Earth Stood Still — his 14th studio effort — features 11 new original compositions that exemplify the artist’s trademark mix of romance, idealism and humor, channeling a true believer’s passionate affirmation of life, love and rock ’n’ roll. Such new Nile originals as “Sanctuary,” “Expect Change” and “Way of the Heart” underline Nile’s abiding passions, while the more out-there “Off My Medication” and “Where There’s a Willie There’s a Way” (co-written by fellow musical veteran Michael Des Barres) display his self-effacing sense of humor. Nile’s hard-wired social conscience drives the heartfelt “Blood on Your Hands,” recorded as a duet with Nile’s West Village neighbor Steve Earle, and the impassioned “The Justice Bell,” inspired by Nile’s encounter with civil rights icon and U.S. Congressman John Lewis.

“I always write about the world around me, and this time around, the world around me was a little crazier than usual,” Nile observes. “These songs were inspired by the pandemic, injustice, politics, love, compassion, joy, sorrow, ignorance, human suffering, man’s inhumanity to man — the usual riddles and mysteries of life, and of course the occasional hell-raising rock ’n’ roll song or two.”

Nile recorded The Day the Earth Stood Still with his longtime producer Stewart Lerman (whose other credits range from Elvis Costello to Mumford and Sons) and his longstanding live band. “We recorded this album in January 2021,” Nile notes. “We all wore masks the whole time and did our best to keep things safe. The whole band, except me, had actually caught COVID on our last gig before the pandemic hit, on February 29, 2021, but everyone recovered. I’ve made nine albums with Stewart now, and it’s always magic and always fun. This one was especially inspiring, despite the extra hassle. The basic tracks were recorded fast, and seven or eight of the songs still have the original live vocal.”

Willie Nile’s dual passions for life and music has fueled his long-running musical career, which took off after the Buffalo, N.Y. native made his way to New York City in the early 1970s. After establishing himself as a popular performer on the downtown club scene, Nile attained national status with a trio of widely acclaimed major-label albums — Willie Nile, Golden Down and Places I Have Never Been — before going the indie route with a lengthy series of acclaimed independent releases, including Beautiful Wreck of the World, Streets of New York, House of a Thousand Guitars, The Innocent Ones, American Ride, World War Willie, Children of Paradise, New York at Night, the acoustic If I Was a River, and the covers collection Positively Bob: Willie Nile Sings Bob Dylan.

Releasing albums and touring internationally on his own terms has allowed Nile to expand his loyal fan base to encompass much of the planet. His longtime admirers include Bruce Springsteen, with whom Nile has guested onstage on multiple occasions, and Pete Townshend, who personally requested him as the opening act on the Who’s historic 1980 U.S. tour. The list of avowed Nile fans also includes Bono, Lou Reed, Ian Hunter, Graham Parker, Jim Jarmusch, Little Steven, and Lucinda Williams, who once remarked, “Willie Nile is a great artist. If there was any justice in this world, I’d be opening up for him instead of him for me.”

Having been forced by circumstance to curtail his touring activities for an uncharacteristically lengthy period, the seasoned road warrior is looking forward to taking The Day the Earth Stood Still on the road and renewing his one-on-one relationship with his fans. “I’m so proud of this album,” Nile asserts. “It was born of a pandemic nightmare, but I think that it offers hope, and passion, for better days to come. That’s what I need, as a person and an artist. And everyone brought their “A” game to the studio.

“I still feel as driven and inspired as I’ve ever felt, and I feel like I’m currently doing some of my best work,” Nile states. “I don’t know why the songs are still coming to me like they are. I just try to get them down as best I can. And I’m fortunate to have a great team of people around me to help bring the songs to life. Anybody who’s seen me perform with this band knows that nobody’s phoning it in, and that these guys give everything they’ve got, every show, every song, every night.”

Indeed, after more than half a century of music-making, Willie Nile continues to keep the faith. “After all these years I’m still feeling the passion and the power and the pull of rock ’n’ roll as a way out, as a vehicle that can offer salvation and redemption and joy in this crazy-ass world. Here’s to more music and magic on the road ahead!”