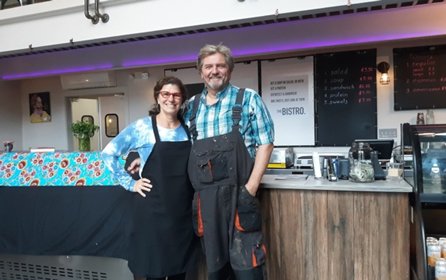 Vitek Kruta and Lori Divine-Hudson inside their bistro. (Photo by Linda Enerson)

Vitek Kruta, a professional painter, sculptor, and conservator, originally went looking more than a decade ago for a larger studio space in Holyoke. Instead, he and his life partner, Lori Divine-Hudson, stumbled into something very different.

They came across two rambling buildings with more than an acre of floor space — the factory and adjacent warehouse of the former Judd paper mill – that cost less than the price of a house in the area. Soon after buying it in 2012, they started thinking about what to do with all the extra space. Their initial idea of offering a few art classes evolved into the Gateway City Arts Center, an ambitious venture showcasing just about every imaginable form of art.

Their big dreams were met with big bills not just for renovation but also for pricey upgrades necessary to bring the buildings up to code. The project illustrates the potential as well as the challenge of using art to repurpose old mill buildings and add new life and vitality to struggling towns.

Over the past decade, Divine-Hudson and Kruta have thrown both muscle and money into reconstruction of their property. They first focused on reconstructing cavernous rooms of the old factory into two stages and adjoining bars. They then added a café and commercial kitchen that connects the two buildings, a studio and workshop space for visual artists, and coworking spaces for start-ups and entrepreneurs. More recently, they finished off a gallery space. A full-size restaurant opened in November.

Kruta likens the project to a giant sandbox. “This is a place where you can go and very affordably have the tools and space you need and have no more excuses not to do anything because they aren’t available,” he said.

As their vision for the property expanded, so did their challenges. They had to find the right mix of attractions to draw crowds large enough to sustain the businesses they had assembled. “It’s a great challenge to get people to Holyoke. It’s a challenge to compete with Northampton,” Divine-Hudson said. “When people think about going out to dinner, they don’t think about coming here yet, but we are hoping they will.”

Other challenges have been even more daunting, such as the nearly crushing financial burden of bringing the old buildings up to code.

The new elevator, which cost about $200,000, is just one of several pricey upgrades required to bring the building up to code. The roof cost roughly $100,000. Other cost estimates have been prohibitive.  “We would love to turn the top floor into condominiums, but you have to reinforce the building for earthquakes,” she said. The price tag of $500,000 for that job was too high to move forward.

State regulations disproportionately burden developers like Kruta and Divine-Hudson that seek to redevelop buildings in communities with weaker real estate markets, according to Marcos Marrerro, Holyoke’s director of economic planning and development. That’s because the regulations stipulate that when renovation expenses surpass 30 percent of the property’s assessed value, the project is then required to meet more stringent building code requirements.

The assessed value of the two buildings that make up Gateway City Arts is several times lower than comparable properties in Boston. As a result, a significantly lower level of renovation costs trigger more stringent code standards than would have occurred with a comparable project in stronger real estate market.

“Let me be clear, building codes are important,” said Marrero. “Society needs a way to ensure safety and accessibility. These are critical things we all want. But the one-third rule dissuades or makes it hard or even impossible to phase projects in weak real estate markets like Holyoke.”

He says this is true for public as well as private ventures. For example, city halls are frequently in older buildings. “Hypothetically, just putting in new windows could trigger full code requirements,” said Marrerro, requiring renovations so costly that it might dissuade town officials from even making minor improvements to energy efficiency.

Divine-Hudson and Kruta were able to get public support for some of their renovations. A $75,000 state grant helped them build a commercial kitchen that is used as an incubator for new food businesses. The city of Holyoke provided a non-interest bearing loan of $25,000 for window restorations. However, most of the new construction has been privately funded.

The renovation costs have challenged their ability to realize a profit. While some of their businesses are doing well, others haven’t taken off. The coworking space, for example, has office space for 25 start-ups or freelancers, but only four spaces are rented. Divine-Hudson says that that program and several others were hampered by restrictions on advertising until the new, accessible elevator was installed.

“If the state is interested in more of these buildings being repurposed, there needs to be some reflection of that interest in policies that make these projects sustainable,” said Divine-Hudson.

Despite the challenges, the couple has been able to move forward largely because some of their businesses, such as the concert halls and adjoining bars, have been supporting other less profitable businesses.

Those businesses have helped establish Gateway City Arts as a regional performance venue attracting over 50,000 visitors a year with help from two major record labels based in the state. A recent concert of Rubble Bucket, produced by Signature Sounds, drew over 1,500 people. “We’re still recovering from that event,” Kruta quips.

The project has also become an anchor of the city’s economic development efforts in the neighborhood. According to Marrerro, the success of Gateway City Arts has inspired several other developers to repurpose old buildings in the area for commercial or residential projects.

“What Lori and Vitek have done is remarkable,” he says. The city recently built a boardwalk running along the canal on Race Street, encouraging visitors to Gateway City Arts and other developments in the area to walk around and spend time in Holyoke. According to Divine-Hudson, the new restaurant is also designed to encourage people to spend more time in the city rather than come in for an evening concert and leave immediately after it ends.

“I’m very proud of what we’ve done,” says Divine-Hudson. “We’re not sustainable yet, but we’re hopeful that with the changes we’ve made and are making, we can focus on what we do best, which is working with people and art.”